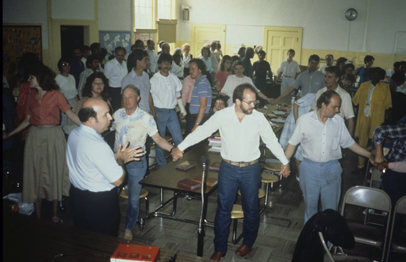 In 1986 Charlie Middlebrook, Ron Sellers, and Doug Williams, three preachers from the Houston area, began to plan for a new ministry to the city of Houston. They were without experience in this area, without existing models among Churches of Christ and without monetary support. On the second Sunday morning of 1987, sixty-seven very apprehensive participants gathered at Lee Elementary School, just north of downtown, for the first worship service. They worshiped, they preached, and they shared a meal. People came from the suburbs and from shelters and neighborhoods nearby.

The vision spread quickly and Impact continued to grow. During the next ten years they would average one move per year as they outgrew facilities. They met in city parks, a YMCA, a declining housing project close to downtown and a warehouse on Washington Ave.  After working out of borrowed buildings for years, Impact found a permanent home in the heart of Houston’s First Ward, where they met for about three years with no heating or air-conditioning while awaiting funding for conversion from a warehouse to a place of worship, and the campus expanded in subsequent years.

Impact has had a worldwide imprint. Thousands of interns have come over the years to work with Houston’s inner-city children during the summer, and many of those interns have stayed for longer periods of service and become members of Impact. Hundreds of youth groups have come both in the summers and on spring breaks to serve Houston’s inner city and be inspired to serve in their own communities. Former Impact workers and friends have been influenced to begin urban churches and ministries throughout the country, in places like Portland and Temple, TX, and New York City. Several now-independent and flourishing organizations that focus on underprivileged children have spawned from Impact, including Small Steps, a Christian pre-K program; the Youth Development Center, a Christian after-school literacy program, and Camp of the Hills, an urban-focused church camp in Texas’ hill country.

Impact continues to do many of the things it has become known for. Impact still invests heavily in urban Houston’s children and youth, with summer programs that reach out to 550 children and weekly Bible classes, small groups and activities throughout the year. Impact’s Resource Center has seen sky-rocketing demand in recent years and has grown in its ability to meet those needs. Impact still provides much-needed services to the homeless, and has added a six-month residential recovery program called the Life House.

What a ride! Despite all this we truly feel that in many ways we are still learning, growing, and getting started in what God would have us to be. We are looking forward to the future, with your support and with God as our guide.