We have many wonderful young people who worship with us at Impact and Erick Aybar is one who stands out among the crowd. He is an outstanding young man and has grown so much, especially in the last year, and has become a leader in the church that we all look to as an example. 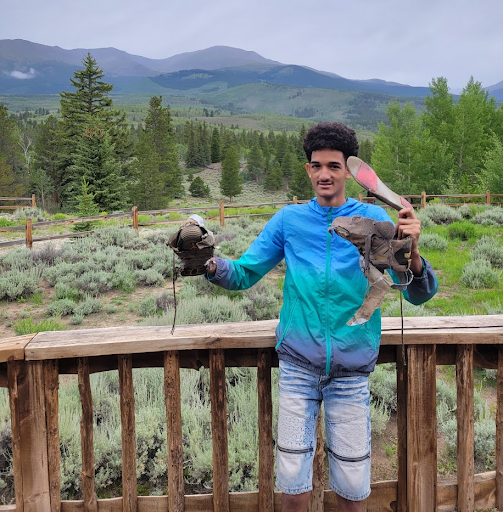 His mom began bringing him to Impact along with his sister Esmailyn and brother Elion when Erick was in fifth grade. He was a bit skeptical at first, but soon came to love being part of the Impact family and everything that comes with that. Over the past few years he has grown from a quiet shy boy who seemed to be afraid of speaking up and sharing his thoughts to someone who always has a good insight or questions that others might be thinking, but don’t want to ask. He volunteers to read, pray, and recently even lead singing.

The last two summers he has interned with our VBS program. Each day before all of the other interns arrived at Impact Erick had already been there for a couple of hours helping his mom, who is paid to clean the Impact buildings. Then he moved on to his intern duties and whenever the high school group met in the evenings he was a part of that as well.

Throughout the school year he helps in the sound booth on Sunday mornings, he participates in Tuesday night worship with high school, regularly volunteers at the Resource Center on Wednesday nights, and helps with the Thursday night VBS classes as well as things like mowing yards, helping people move, and various service projects around Impact. He is always eager to help in any way he is needed.

One great example of this servant leadership was on Wilderness Trek this summer. Not too far up the mountain the sole on one of Erick’s boots fell off, so we did what anyone would do – duct taped it back together! Later the sole of the other boot came off so we duct taped that one too. On summit day we started hiking at one in the morning and Erick was in the front of the group from the get go. With it being so early you can imagine not everyone was in the best mood, but Erick started singing and helped lift everyone’s spirits. He kept a positive attitude and kept singing and encouraging everyone around him through the night. As the sun came up we noticed that the tape on his boots wasn’t doing the job quite as well as when we started. The sole of one of his boots was turning sideways and only got worse as we continued to hike, but that didn’t change his attitude. He continued to sing and encourage others all the way up to the top of the mountain and back down as well. By the time we got back to our camp he was basically walking on very thin pieces of cardboard that lined the bottom of his boots. Due to changes in weather we hiked all the way down to basecamp on the same day that we made the summit (normally we would do that the next day) and Erick’s boots were in such bad shape that he ended up wearing slides the last few miles down the mountain and his attitude never changed. He never complained about his shoes or any other circumstances. He only sang, encouraged others, and enjoyed the beauty God had surrounded him with.