Arriving in Houston at age 28, Dimas was seeking safety from the turmoil in his home country of El Salvador. He arrived alone and would wait for two years to be reunited with wife, Antonia, and his daughter. Dimas felt the call of God on his life from a very early age. As a young man he began to study theology and philosophy in El Salvador and Mexico. His goal was to become a Catholic priest, which at the time was how he perceived he could best serve God. Unfortunately, after arriving in Houston he made poor choices in friends and became involved with drinking and substance abuse. Satan was trying to destroy the voice of God in Dimas’s life. But our Father had other plans. 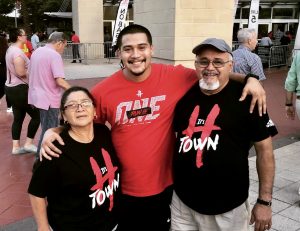 His first contact with Impact came in 1982 when two Impact ministers knocked on his door offering food. One of those ministers, Calvin Henry, would become a dear friend and mentor in his life. They invited Dimas to join them each week for Spanish-speaking worship services at Impact, but Dimas held out for six months. Finally, after his wife and daughter arrived and began attending faithfully themselves, the three of them began to attend together.

As Dimas continued to grow in his faith, he began to see the truth of the gospel and surrendered his life to the Lord. From then on, he devoted himself to serving the needs of those around him. He began to teach and preach, lead singing, drive the vans and work constantly at Impact’s Resource Center. To this day, he finds tremendous joy in serving and feeding the poor and disenfranchised.

Steve Austin, one of Impact’s ministers at the time, was very influential in urging Dimas to work hard and deepen his knowledge of the Bible. Dimas would later graduate from the Gulf Coast Bible Institute in order to do just that. Dimas now feels that his childhood calling by God came to fruition as Steve mentored him and helped him to become a minister and elder. When time came for the selection of elders at Impact in 1998, it was clear to all that the Holy Spirit had raised up Dimas to serve in this role.

This inspiring story is a testimony to the power of our God –that the childhood calling of Dimas in El Salvador found its fulfillment thousands of miles away in Houston. Dimas and Antonia are constantly serving the church in whatever way necessary, and we are so grateful that the Good Shepherd has blessed our Impact family with such a good shepherd in Dimas.