This week there is a glaringly empty bench in the foyer of the Impact office. It’s a bench that, for quite some time, has been occupied by Terrell Thierry during parts of the day. Terry was a homeless man with a big heart. He had the sky as a roof, the heat from the sun as his blanket, and this church as his family. He cleaned our vans, picked up trash around campus, and was always ready to lend an extra hand whenever needed, which was daily! Terry loved his church. 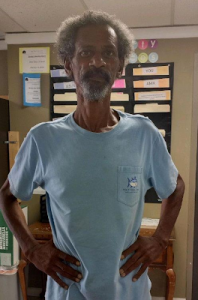 Recently Terry began losing a significant amount of weight, was at times losing consciousness, and was suffering from memory loss. Tim Sells, one of our ministers, collected money so Terry could afford to be taken to hospital where the doctors discovered a large tumor in his stomach.

Last week, however, before any treatment plans could be discussed, Carlos, Impact’s bilingual minister, was leaving campus with his family and saw Terry lying in the street with Geremy, our Middle School minister, by his side. Geremy was waiting for the ambulance and, when it arrived, they sadly discovered he had already passed away.

We are deeply saddened by the loss of Terry. In many places he was a nameless face, easily passed by and forgotten. At Impact, though, he was family. He was respected. He was loved. And he will be deeply missed.

There are scores of lessons here. The importance of seeing the hurting, lonely people no one else does. The difference a wounded healer, someone in the middle of their own struggles, can make in the lives of people around them. The teamwork of God’s people. The importance of church family. Knowing someone well enough to know when something is wrong. Not taking the people in our lives for granted. The list goes on and on! We are thankful, Terry, for the lessons you taught us. They are forever etched in our hearts.

An empty bench is not all bad, though. Like another group of close friends who encountered an empty tomb, we know without a doubt that there is good news in this story. Terry is no longer homeless. He has returned to his true heavenly home, sits at a grand banquet with his Creator and Savior, and awaits his family to someday join him there.

See you later Terry. We love you!