Arms of Hope was recently blessed to meet Ms. Olga Romero, who is an amazing woman with a great husband. Unfortunately she had recently been robbed at gunpoint while running her daily errands. She was followed to the bank, where she withdrew money to pay her bills for the month, and when walking out of the bank she was ambushed by three men. 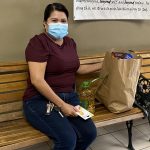 She was choked and her head was slammed against her car several times, and once on the floor they kicked her several times and she lost consciousness. Ms.Olga does not remember clearly what happened, but she remembers waking up at the hospital and not knowing how she got there. Fortunately her husband was there to calm her down.

They filed a police report but there are no leads at this point. Over $1400 was stolen, and although her son was able to help her with some of their bills they were still behind. After a week of recovery she returned to work, but after her second week she had to quit because she was suffering PTSD. She was constantly nervous and was suffering from panic attacks. She explained that on one occasion her boss tapped her on the shoulder from behind and she dropped to the floor and began to cry and scream.

Her husband continues to work but with one income it has been very challenging for them to make ends meet. They had been stressing over not having enough to pay for the electricity, especially with the Texas heat, and Ms. Olga also felt guilty because her husband had to cover all the bills because of her inability to work. When we informed Ms.Olga that her electricity bill would be paid in full she was filled with joy and many emotions. We were also able to provide her with food and a gas card.

Let us continue to pray for this family to strong through this hard and painful time. We pray that God will continue to bless them with health and spiritual healing and that they may grow strong in their faith.