Carl Windsor was 56 years old and in an AA meeting when he was told for the first time, at least in a way that he really believed it, that he was loved. 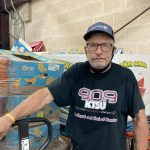 Carl grew up in a trailer park in Atlanta with alcoholic and abusive parents. His father introduced him to alcohol and he began numbing his pain with it at 14, something he would do every day for the next 42 years. He moved to Houston as a young man, and eventually also medicated with methamphetamine, cocaine, and all manner of drugs while alternating between working odd jobs and being homeless. Alone in the world except for the fellow drug users he would temporarily have as friends when he had money, he found out about each of his parent’s deaths years after they died. When he looks back at this time he thinks primarily of hopeless mornings – waking up sick, miserable, penniless and desperately looking for another fix so he could face the day. He also thinks of images like being on his hands and knees for hours “crawling around like a bug,” looking for a trace of leftover powder he might have dropped the night before.

When Carl was referred to Impact and discovered the Life House recovery program he filled out an application, deciding this was his chance to end his misery. When he showed up for his interview with Harvey Davis, Impact elder and supervisor of the Life House, he threw his bottle of liquor and crack pipe in the trash can outside. When the interview was delayed, however, he grew impatient and considered retrieving them out of the trash and leaving. Thankfully he didn’t leave, however, and began his six-month stint in the Life House that very day.

When Carl began hearing the words ‘I love you’ from Harvey and from those at his AA meetings, he initially was confused, since he didn’t have any money in his possession and in his view had nothing to offer. Slowly but surely, however, he began to love himself and to see how others and God could possibly love him. Another breakthrough came when his AA sponsor helped him to finally be able to forgive his parents and to see how their behavior came as a result of their pain and alcoholism. Unable to forgive them in person or go to their graves, Carl later wrote the words ‘I forgive you’ on a paper airplane and threw it away. Carl was baptized at Impact on a Tuesday night by Josef Bilnoski.

Carl overcame every obstacle thrown at him and successfully completed his time in the Life House, and has also overcome two relapses he suffered after graduating. In both cases he asked for forgiveness, renewed his commitment and started over, rather than fleeing and isolating in shame like so many do. Carl now has over three and a half years sober and has also been a full-time driver for Impact for an impressive run of two years. He splits his time picking up food donations from stores like Sam’s and CostCo for Impact’s Resource Center, and also picking up clothes and household donations from individuals throughout Houston. Every day is hard work and a fresh challenge but rather than waking up hopeless, sick and miserable he now wakes up with prayer, with goals, with a purpose, and with a new commitment to live sober and for God. He is now an important and loved member of a family, and he knows it.