The ministry of the Impact Resource Center has been transformed by the COVID-19 crisis. Most  of  these  changes  have  presented  their  own  unique  challenges,  one  being  that  most  human  interaction  is  limited  to  behind  the  window  of  a  car. We do allow people to receive groceries on foot, however, and two recent stories have shown the desperation many people are facing. 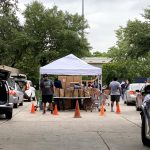 The first was an interaction I had with a man who had recently been released from prison and had newly committed to getting his life back on track. He explained to me how basically all homeless services in Houston other than providing food were closed, and as a result he feared that he would be homeless for the foreseeable future. A text to our social work partners confirmed this, and I gave him food and did the only other thing we could do, which was to let him into our clothes ministry (also closed due to the virus) to let him pick out a second pair of clothes.

Another example was when a husband, pregnant wife, and small daughter came through the line on foot, having ridden three buses to get there. Out of a job and unable to receive federal aid due to their legal status, they had been evicted and were as a family living on the streets. Our Arms of Hope partners are currently working on this situation, and on dozens of other desperate cases.

It is entirely through your past, present, and future support that we are able to feed so many hungry people, and then are also able to help those in need of more than food. We count it a great privilege and calling to be able to do both of these things and to do them well. There are men, women, and children who are hungry during these desperate times, and there are also those whose needs are even greater, and thanks to you we hope despite all obstacles to continue to love and support them.