Rest for the Soul

The new sign in front of Impact Lindale isn’t big, but it beckons “Come” and is already   making   an   impact.   It   wasn’t   long after the sign was installed that we received our first phone call from someone who had walked by and seen our number. 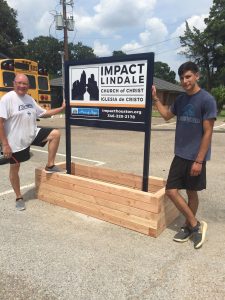 I returned Ethan’s phone call immediately after listening to his voice mail, hearing the desperation in his voice as he ended his message, saying “I really need church.” When I called and asked if he’d like to come have a cup of coffee, he dropped what he was doing and was sitting in my office 10 minutes later. Ethan has been beat up by life – in and out of prison, trying to escape an alcohol addiction, divorced from his wife, taking care of their child on his own, and struggling to pay the bills. His family and friends had given up hope that he would ever change and he was filled with discouragement and a hopeless future. He had put on Jesus in a loving Church of Christ a few years ago and knew that this was a place he could come when life’s burdens were weighing him down.

We talked for over an hour, during which time he was listened to, encouraged by Scripture, and filled with hope through prayer. Because of Impact’s long-standing ministry, I was able to tell him about numerous ways he could get involved in church, including the prison ministry that now meets at both Impact Houston and Impact Lindale, the Sunday evening worship services that will be starting at Impact Lindale on October 27th, and youth classes and events for his son. Now, with his head lifted a little higher, Ethan has been holding down a job for several weeks and is in a much better place!