In 1998 Christ’s Gift Academy, a Christian school for orphans, was established in Mbita, Kenya, a small fishing village on the shores of Lake Victoria. The following year I visited the school and was asked by one of the founders if I would consider sponsoring one of the students. This contribution would help defray some of the expenses for the prospective student, Maritha Akinyi Owino, who had recently been orphaned. That decision has impacted Maritha’s life, impacted my life, and has impacted the Impact Church. 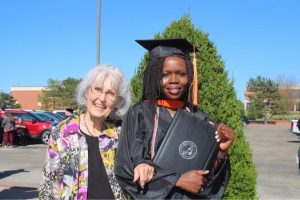 This spring she graduated cum laude with a Mechanical Engineering degree from Oklahoma Christian University, and in recent weeks began full time employment as an engineer with Niagara Bottling Company. Maritha considers her journey a beautiful blessing from God, but it has been a rough one, filled with surprising and unpleasant bumps, dangerous hazards,detours, and often what appeared to be impassable road blocks. Her Kenyan family was not just fragmented but totally dysfunctional, as many families in rural Kenya are. Her father, whom she rarely saw, was a polygamist whohad three wives and at least twenty children. He had a definite mind set that females should not receive an education. He died when Maritha was five and her mother died when she was eight, leaving her and her six siblings orphaned.

A closed door? No, God had plans for her! In 2013 she moved to Knoxville, TN, to live with her ‘brother,’ the son of the lady she and her sister stayed with after her mother died. She attended college for a year, only for the school to lose its accreditation, causing her to lose all her college credits. In 2014 the young lady who had encouraged me to sponsor Maritha at CGA called me. “Mom, why don’t you have Maritha spend the summer with you and introduce her to Impact.” Maritha then served as a VBS intern the following three summers, making lifetime friends with other interns and Impact members. This relationship with Impact would also come to be a primary way God would provide for her education, as Impact’s Brooks Scholarship Fund enabled her to enroll at Oklahoma Christian. Despite this wonderful help and that she was also working part-time, she discovered after her freshman year that she would not be able to return to OC due to the expense of room and board. But again, God had a plan! Impact’s Casey Long (Varner), who also attended OC, invited Maritha to a weekly devotional and introduced her   to   the   Simmons   family.   That   family,   who   had   housed   several   international   students   in   the   past,   offered to let her stay at their home for the next three years!

Maritha’s story is an example of how God has used Impact and his bodyof believers throughout the world to change ashes into a crown of beauty.

PS – When Maritha introduces me to her friends, she makes no reference to my being her sponsor, but says, “This is my grandmother.” How precious to my heart.