Meet Paul Mireles, who is a very special client to me and whose story I will try to tell the best I can. I met Paul in 2015 when he came into my office and asked me for help, but Paul has been a devoted and beloved member of the Impact community for over 20 years. He is a single 64-year-old man who has been living behind Impact’s main building in someone’s garage for the last 20 years, and does not have access to showers, a restroom, or a kitchen. Paul is a devout Christian, however, and every day he spreads the gospel with those less fortunate, sharing his living quarters and his very little resources with anyone in need. 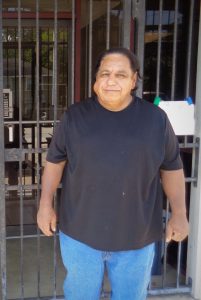 Paul has been unable to leave the mile radius of his home for over 20 years due to anxiety and panic attacks and therefore also unable to receive any medical  treatment.  So  many  people  have  attempted  to  help  Paul  in  the  past.  Some  have  taken  the  initiative  to  drive  him  to  see  a  doctor,  only  to  be  denied  by  another  panic  attack.  Impact  even  hired  him  as  their  groundskeeper  as  a  way  to  help  him,  a  job  he  has  performed  faithfully.

Through the years Paul’s health has deteriorated, and when he came to my office he was desperate for help. As I tried my best to get his needs met, I was confronted with numerous barriers, proving his identity being the most difficult. He doesn’t have any living family and if there is extended family he wouldn’t know how to contact them. Over the next couple years I  tried  to  assist  Paul  by  providing  minimal  counseling  to  help  with  his  anxiety, helping him with nutrition and ways to manage his weight (he’s lost 30lbs), providing access to fresh food, and praying with him – mostly just being a support system and encouragement. From the first meeting it was evident that his situation was beyond my capabilities and really needed to be handled by a medical professional. Numerous organizations were contacted but didn’t lead to much, as the biggest obstacle was getting someone to him due to his inability to leave the campus. On June 30th we celebrated his 64th birthday in my office, and after he left my office I prayed for Paul. That same day a phone number came to my desk -the MHMRA Mobile Crisis Unit – and I called and poured my heart to the operator. She quickly responded with “yes we can certainly come to you and help”. On July 5th 2018 Paul was visited by  the  team.

Today  Paul  is  receiving  exposure  therapy,  psychiatric  treatment,  and  internal  medicine.  Recently he came into my office with the biggest smile I’ve seen. He wanted to tell me that he finally drove out of the “radius” and visited Chick- Fil-A and Target with his therapist. Can we just take a moment to recognize the power of prayer? Paul was not ready to share his story with everyone until a few weeks ago. He agreed to have his photo taken and wants to be a testimony to others; he has not completely broken free but is many small steps closer.