I Was That but Now I Am This

A Story of Recovery and Redemption

Every Sunday on this sphere called Earth millions of people assemble in houses of prayer to hear the timeless story of the recovery and redemption of the human race. This story of love, sacrifice, and restoration mesmerizes and astounds time and time again as the One and Only God of the universe sacrifices His One and Only Beloved Son for the restoration of humanity, the apex of His creative genius in the world. The One and Only Beloved Son, sent as an agent of grace and mercy, brings the message of hope, peace, and deliverance to a humanity that has become only a glimpse of the glorious image in which it was created.

In millennia past, this narrative was not only played out on a hill outside of Jerusalem where a blood sacrifice was offered for sin on a Roman cross, but it continued to be rehearsed in the community of the faithful. Men and women loved much and gave of themselves for the benefit of another. 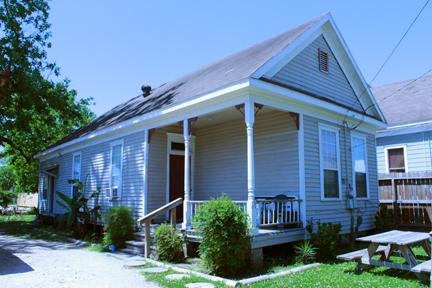 Some proclaimed the good news and refused to be delivered from physical death, so that many might believe and be delivered from spiritual death. Other carried a burden for the poor, disenfranchised, and the forgotten; they did not rest and would not rest until the “least of these” were cared for, following the pattern of the One and Only Beloved Son.

In our century, in the city of Houston, TX, in the community of 1st Ward, the narrative continues among the poor and disenfranchised, among the homeless and the forgotten, among the children, and among those who are held captive within the life-stealing clutches of alcohol and drug addiction. As Christ followers, the Impact Houston Church is on the front lines in many areas, among them recovery from alcohol and drug addiction. Founded by the late Elder Doug Williams in 2009, the Impact Life House stands as a beacon of safety and hope for men battling with substance abuse and addiction.

The Life House Recovery Program is 6 months long from enrollment to graduation, and has a holistic approach, focusing on the spiritual, physical, emotional, and psychological needs of the recovering addict. At the end of the program, these men can truly proclaim I WAS THAT BUT NOW I AM THIS; I was an addict bound by a disease that held me hostage to self-destruction, but now I walk in freedom and sobriety. Furthermore, these men regain the sense of God-given dignity and integrity that was stolen. Not every case is a success story, but each man leaves knowing that there is a group of people at Impact that loves them and there is a God who has worked through Impact to demonstrate His love for them. God has been good to the program; the average success rate for recovery programs is about 10%, but for Impact the success rate has been around 20%. The residents of the Life-House are mandated to participate in the following 7 steps in their road to recovery:

I will conclude by highlighting two men; one completed the program and one did not. First, I would like to introduce you to (let’s call him) Foster. Before Foster came into the Life-House he was known in the community and had been around Impact for a while. Largely because of health issues Foster reevaluated his life and decided that he wanted to get clean. Foster is a very likable person, was a hard worker from the very beginning, and soon became the “star” of the Life-House. However, he began to take his sobriety for granted and quit “working the program” the way he should. Foster began to believe that he had the addiction under control and began to engage in behaviors that would be normal under regular circumstances but for the recovering addict are risky and a prelude to relapse. Not long after this change in behavior, Foster relapsed. He was then given a second chance in the program, but was again unsuccessful.

Secondly, I would like to introduce you to Nate. Nate is a native of San Francisco, CA, and came to Houston several years ago looking for an escape after his life spiraled out of control due to alcohol addiction. Finally, after unsuccessfully attempting to quit drinking on his own and losing his job, Nate came to terms with his addiction and sought help through the Impact Recovery Program. After successfully completing the program in 6 months, Nate decided that he loved Impact and wanted to stay and be a help to the church and to those who would be coming into the program after him. Currently, Nate is the Assistant House Manager for the Life-House and is also in charge of campus security. Nate performs his duties with pride and integrity and has earned the respect of everyone at Impact and the men who are under his charge in the Life-House. He is a source of encouragement and strength to the leadership of the church and the Life-House.

The story of recovery does not always end in victory for the addict but we believe the effort is worthwhile due to the victories that do happen. We love and appreciate all of you that stand with us in our effort to bring the addicted to physical and spiritual sobriety. Without your support this work would not be possible. Perhaps you find this a worthy cause and you want to help, feel free to contact us. Maybe you want to help in a financial way, please feel free to make a contribution to the Impact Life-House. However you decide to help, may God bless you richly for your sacrifice.

One Comment On “I Was That but Now I Am This”